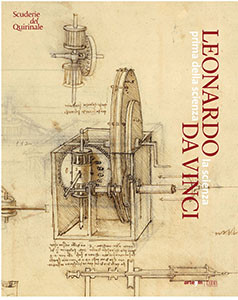 “he made many fine inventions but, because he was never satisfied with his own work, paintings in colour by him are rare… nor did his mind ever rest but created new inventions with great ingenuity”. [anonymous gaddiano, 1542]

an exhibition about leonardo da vinci, the creator and pioneer of modern scientific culture within the intricate network of relations between technology, engineering, the visual arts, thought and ideologies between the fifteenth and sixteenth centuries, is due to open at the scuderie del quirinale. his early training in tuscany, his stay in milan and the later period of his life spent in rome clearly reveal the osmosis with the connective tissue of unrest, emulation, debates and competitions which, far beyond the romantic myth of the isolated genius, fostered his unrestrainable passion for making ‘discoveries’. the wonderful inventions and insights of one of the leading figures of the renaissance in europe take shape through the masterly autograph drawings in the biblioteca ambrosiana, the historical models from the museo della scienza e tecnologia leonardo da vinci in milan and the eye-witness accounts of contemporaries: the machinery for building sites, the technical drawing and perspective drawing as essential tools for knowledge and representation, the art of war between tradition and innovation, the visionary utopia of prototypes for flying machines, work and production, the studies on ideal cities and centrally-planned works of architecture, on waterways… an exploration, five hundred years after his death, in the style of leonardo: “my subjects are to be dealt with by experience rather than by words”. [leonardo da vinci, codex atlanticus]