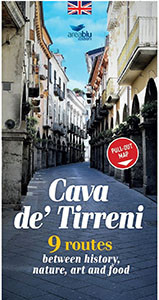 A regular stop for travelers on the Grand Tour, Cava de ’Tirreni is a city of a thousand souls. Considered “the gateway to the Amalfi Coast”, due to its position close to the first municipality of the Divine Coast, Vietri sul Mare, Cava is among the Italian cities of ancient ceramic tradition. Known for its prestigious Benedictine Abbey (where we recommend visiting the library of the national monument Badia di Cava) and the porticoed village that has no terms of comparison in all of southern Italy, and for which Cava is also identified as the “Bologna of the South”, this city is appreciated for its elegance, the cleanliness of its streets, its illustrious history, the goodness and variety of its restaurants, its long tradition in confectionery, its shopping avenues, the socalled “movida” dedicated to young people. However, Cava de ‘Tirreni is not only its porticoed village, but is all one with ancient villages (todays fractions) set on the hills, some of extraordinary charm, in a green valley that, centuries ago, even allowed continuous comparisons with Swiss landscapes. It offers tourists the choice between walks and trekking routes of varying difficulties, but always of great panoramic importance. Cava is today an ancient and young city at the same time, and in this guide it is narrated by journalists and local experts, real “local ambassadors” of such beauty, both naturalistic as well as artistic and architectural. Moreover, not negligible, Cava de’Tirreni is the ideal destination for a stay during which you can embark on daily excursions to the splendid cities of art of Campania, all easily reachable: Naples, Pompeii, Caserta, Paestum among these, in addition to the already mentioned Amalfi Coast and nearby Salerno.